Note: Click here for an indepth online photograph exhibit detailing Exum’s life. Then click on the first picture to start the slideshow.

Lillian Exum Clement Stafford (1886-1925) is quite worth remembering, especially as we celebrate remarkable women in Buncombe County.

In 1920, just prior to the ratification of the 19th amendment granting women the right to vote, the Buncombe County Democrat Committee nominated Exum for a seat in the North Carolina Legislature. She won in the primary, with an all-male constituency, beating out two male nominees. The Buncombe Republican Committee, in keeping with their policy of favoring woman suffrage, and out of deference to Exum, did not oppose her in the general election. However, attorney Charles Lee Sykes, a Republican, ran against her as an Independent. In the November 4, 1920 election, the first time in North Carolina where women were able to cast their vote, women in Asheville stood in hour-long lines in a cold rain.  Some held on to children at their side, others held babies in their arms. There was a noticeable absence of men drinking, usually conspicuous on election day. Instead, the men stood in line alongside their mothers and wives, with their hats in hand.  Exum took the election by a landslide, winning it 10,863 to 41.

Exum took her seat in the North Carolina General Assembly on January 5, 1921. She told a reporter at the time, “I want to blaze a trail for other women. I know that years from now there will be many other women in politics, but you have to start a thing.” Although her political career was cut short by early illness and death, during her year of representation she introduced 17 bills, 13 of which passed into law. 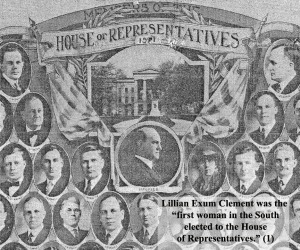 To find out more about Exum’s life and her political career, come to the North Carolina Room, Pack Memorial Library, lower level, where we have a photograph exhibit on display.  A special part of this exhibit is a display of one of Exum’s suits, which was made from fabric crafted at Biltmore Industries, a local enterprise that gained worldwide recognition for its hand-loomed cloth. The suit is on loan from the Swannanoa Valley Museum, and will be on display through March 31. The exhibit is free and open to the public. The North Carolina Room is open Tuesday-Thursday 10:00-8:00, Friday 10:00-6:00, and Saturday 10:00-5:00.