My, how good the Nichols Building looks now that it has a little breathing room!

[This is a follow-up to a previous post about the razing of the Blomberg Garage which sat just to the side in this photo.]

The Nichols Building was built by Archibald Nichols (1875-1937) former secretary for eight years of the Asheville Merchants Association and proprietor of the Nichols Shoe Company that was on Pack Square for several decades. Mr. Nichols specifically erected the building for Robert Cecil, owner of Cecil’s Business College which moved to Haywood Street in April 1928. The school operated out of the top two floors with the ground floor space rented for shop use. The first shops in the building were Claverie’s Pharmacy, Pegasus for Books which was a circulating library, and the Mountaineer Rug Industry.

From publication “Cecil’s Business College–In the Land of the Sky,” Not dated.

Cecil’s “contained one part set aside as a replica of a bank for the students to practice daily banking business.” (From Old Buncombe County Heritage, Vol. 1, p. 112.) 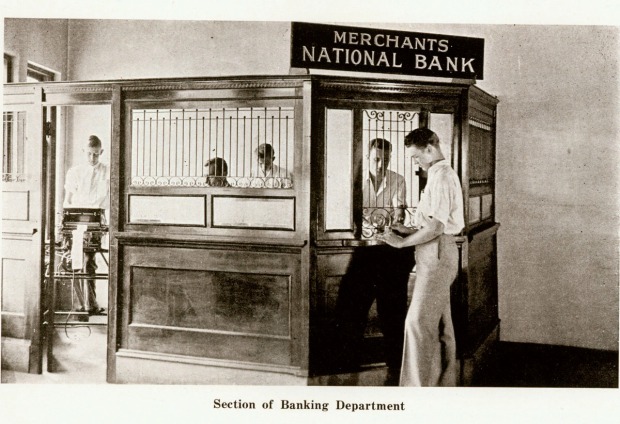 From publication “Cecil’s Business College–In the Land of the Sky,” Not dated.

Photo below is of the 1939 parade of 12th annual Rhododendron Festival shown along Haywood Street. View is from just above street level from the curve in front of Cecil’s Business College (#66) toward Patton Ave. Few other buildings clearly visible: Dixie Stores (#62) and Vick’s Grill (#64-66) on ground floor of Cecil’s building. Cecil’s remained at this site until they moved to Broadway in 1947. 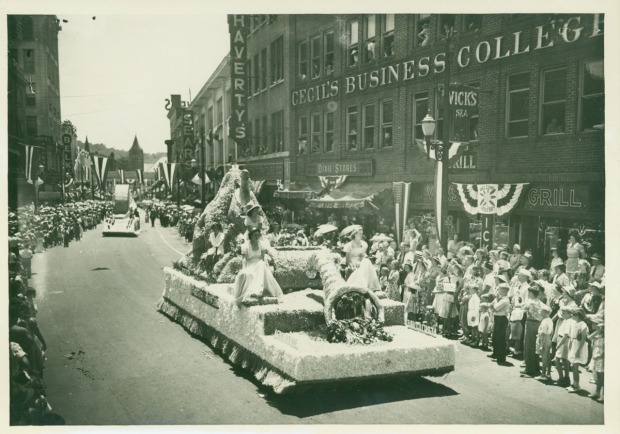 12th annual Rhododendron Festival of 1939 shown along Haywood Street. Print donated 1998 by John F. Barber of the Chamber of Commerce.

Later in life, the building didn’t look so great, but then neither did downtown Asheville.

In view in photo below, at far left in the Haverty Building is Jared’s Restaurant, which served a Classical French menu (which I tend to think of as Asheville’s first restaurant), next is HFC Loans, and right side has Booth-Barfield Realty For Rent signs in windows.

Next door to the Nichols Building, on the south side is the 4-story, former Haverty Furniture Building at #60 Haywood St. In 1986 Roger McGuire and Associates, City Assets Corp. turned the historic Haverty building into luxury apartments, adjoining it to the Nichols Building. Jim Samsel was architect for the project with Allen Roderick of Heartwood renovations and Building Inc., general contractor.

One thought on “The Nichols Building, 62-66 Haywood Street.”