Beech is a community in north Buncombe County six miles up Reems Creek Road — 14 miles from Asheville. It is formed by the junction of Maney Branch and Reems Creek and was named after the beautiful grove of Beech trees growing there. A resident back in 1894 wrote to the editor of the Asheville newspaper saying that “I never see anything in your highly appreciated columns about Beech, which is the most lovely spot in all the whole country.” Beech has been long known for its flat farm land that goes right to the foot of the steep mountains in the Craggy range, making it some of the best farm land in Western North Carolina.

And the residents of Beech know how to stay at something. They have held the longest consecutive Fourth of July celebration in the county, some say — and they are probably right — in the state. This year was the 130th! Belhaven, N.C. boasts the longest but they are a mere 72 years old.

The veterans got many cheers.

The Beech celebration was started in 1884 by Alfred Marion Penland (1833-1898.) He killed a beef and invited the community, who all thought Alfred quite generous since they mostly had pork and poultry on their plates. Alfred was the founder of College Hill school in the Riceville section and later in 1872 founded the old Beech academy at Beech. His wife was Sarah Lewis Penland and they had a son Francis A. Penland, also an educator who retired as principal of Weaverville High School in 1948.  Another Beech resident “Uncle Dave” Penland added to the day’s tradition by roaming the mountainsides for wild flowers, which he then made into bouquets to give to one or two women. The woman who gets the bouquet today is just as pleased as if she’d won the raffle for a new car.

There were kids on skateboards, 4-wheelers and festive bicycles and dogs. 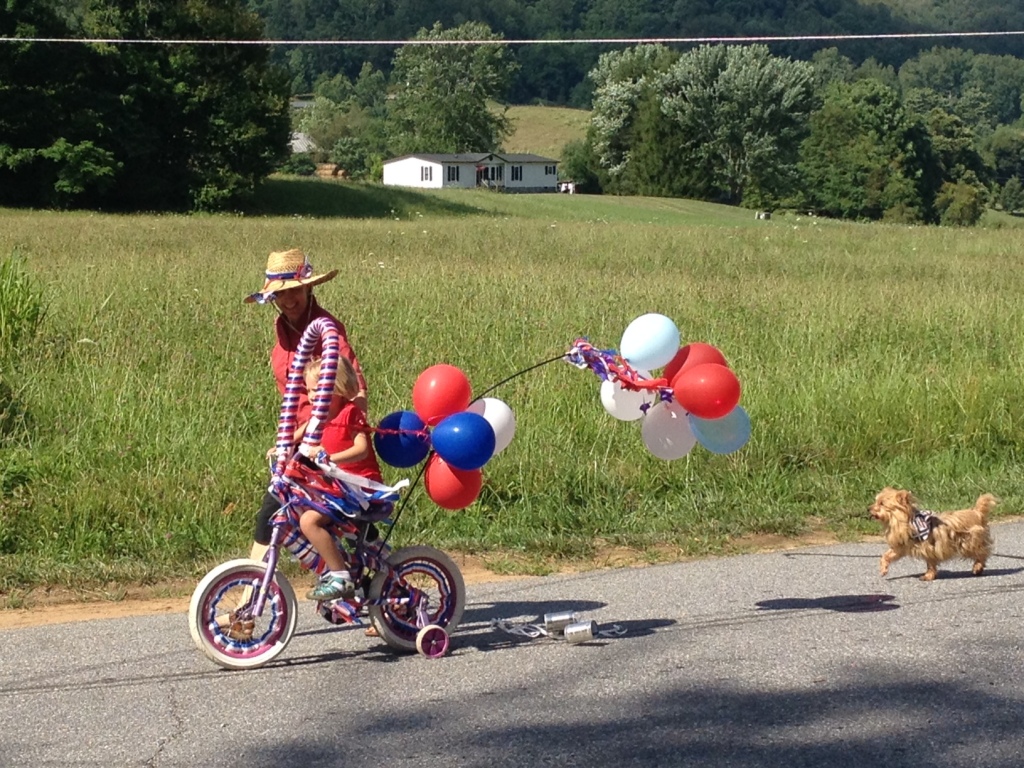 There were horses with stars.

And there were lots of fire trucks, thanks to the Reems Creek Fire Department. Come next year, all are welcome. The parade is followed by a program in the Community Center and then there is a bring-your-own-dish spread out on picnic tables under the Beech trees in back. There are field events for the children and a horse shoe pit. The celebration is always pretty much the same as it has been now for 130 years. As Beech resident Bob Nesbitt said, this is the only place you can ask someone, “You going to the Fourth?” and they’ll know what you mean.