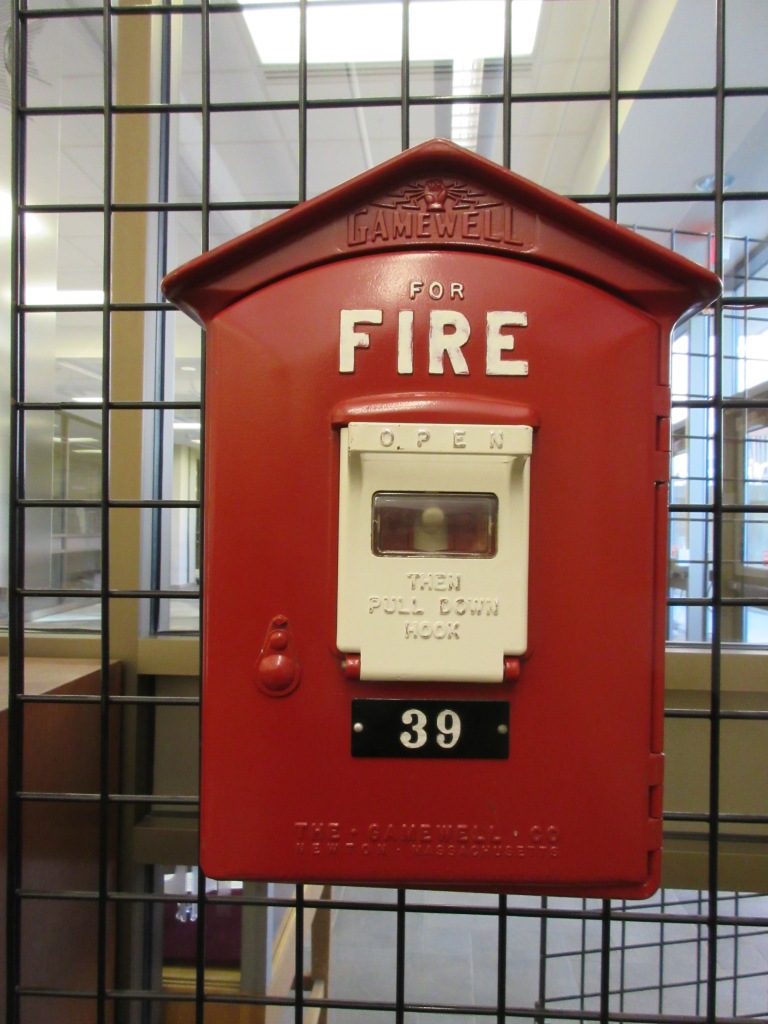 THE NORTH CAROLINA ROOM HAS ONE ON DISPLAY.

WE MIGHT EVEN LET YOU PULL THE ALARM AND HEAR IT RING!

When it was not common for people to have telephones in their homes, if your house caught on fire, you would run to the nearest fire alarm box and pull the handle. Using electric impulses, the box would send a number of tolls on a bell to the fire station where a fireman would translate the number, in this case #39, and know where the fire was. This box would send in 3 tolls, then a short pause and then 9 tolls, a long pause, and repeat itself four times. Register tapes also printed out the number for visual verification.

The fire box system was installed here in the early 1890s, upgraded in 1924, and some monitoring equipment was added in the 1960s. It wasn’t until 1987 that the city removed the 114 public fire alarm boxes in the city citing they were too unreliable and their upkeep was too expensive.

This 1968 street scene shows a fire alarm box on the pole to the right.

The fire alarm box is on display along with a photograph exhibit:

Some of Asheville’s Most Famous Fires.

Firemen can be seen in this photograph climbing to the third floor of the building as the smoke followed an upward draft. Firemen from at least seven companies battled the blaze for about an hour. The fire was caused by burning grease on a kitchen stove, which damaged the building to the extent of several thousand dollars. Tingles’ Cafe was at the current location of Strada Italiano.

If you haven’t been to the North Carolina Room in awhile, this is a nice exhibit to see.