Jon Elliston opened his “Asheville in 1915” talk by appearing in period costume dressed as a “newsie” with a newspaper delivery bag slung over his shoulder, and walked up the aisle hollering out the news headlines of the day while passing out copies of a 1915 Asheville Citizen front page.

All one hundred and fifty enthralled attendees were suddenly transported to Asheville 100 years ago.

Jon’s multimedia presentation covered Asheville’s politics, crime, vices, race relations, sports and recreation, gender, and tourism one hundred years ago. He preceded his talk by pointing out, “One hundred years ago, was a long time ago!” Amazingly enough, some things were very similar to today, but some things were also hard to imagine.  The Asheville Board of Trade spoke of 1915 Asheville as a “modern city, cosmopolitan in its make-up, progressive, liberal, and given to hospitality.” –Much the same as the Asheville Chamber might tout today. But, the Civil War had only ended 50 years earlier, and reconstruction had only ended 30 some years earlier. The town was still influenced by Jim Crow laws and racial tensions still marred the city. But Asheville had one of the first schools for blacks in the state.

Prohibition was imposed in North Carolina in 1908, a full decade before the Eighteenth Amendment made liquor consumption illegal in the United States in 1920. But we learned that Ashevillians still drank. Liquor was shipped in (and brought in) from other states and was also made here. And the law fought hard to stop it; about every week someones still got busted. (Asheville actually went dry the previous year. Newspaper headlines of October 9, 1907, read “Ashevillle Goes Dry by Astounding Number; Many Women and Children Capture Various Precincts.”) Child labor was a big crime to deal with, alongside petty thefts–chicken stealing was popular. Train hopping seemed prevalent, which often left people with missing limbs.

In terms of gender, a newspaper editorialist thought women had no interest in bothering with politics, and if they voted, they’d just vote the same as their husbands. This was stated even though the Asheville Suffragist League had been organized in 1894–the first in the state.

Though most of the photographs in Jon’s presentation were in black & white, he reminded us that Asheville in 1915 was very colorful.

And then came the question-and-answer time. Hands went up–people wanted to know more. Jon’s batting average was pretty good, especially considering he has a day job. Librarians are taught never to answer off the top of their heads–you always have to cite your sources–so, for the most part, North Carolina Room staff kept their mouths shut. But we thought it only fair to look back–with our resources at hand–at some of the day’s questions. 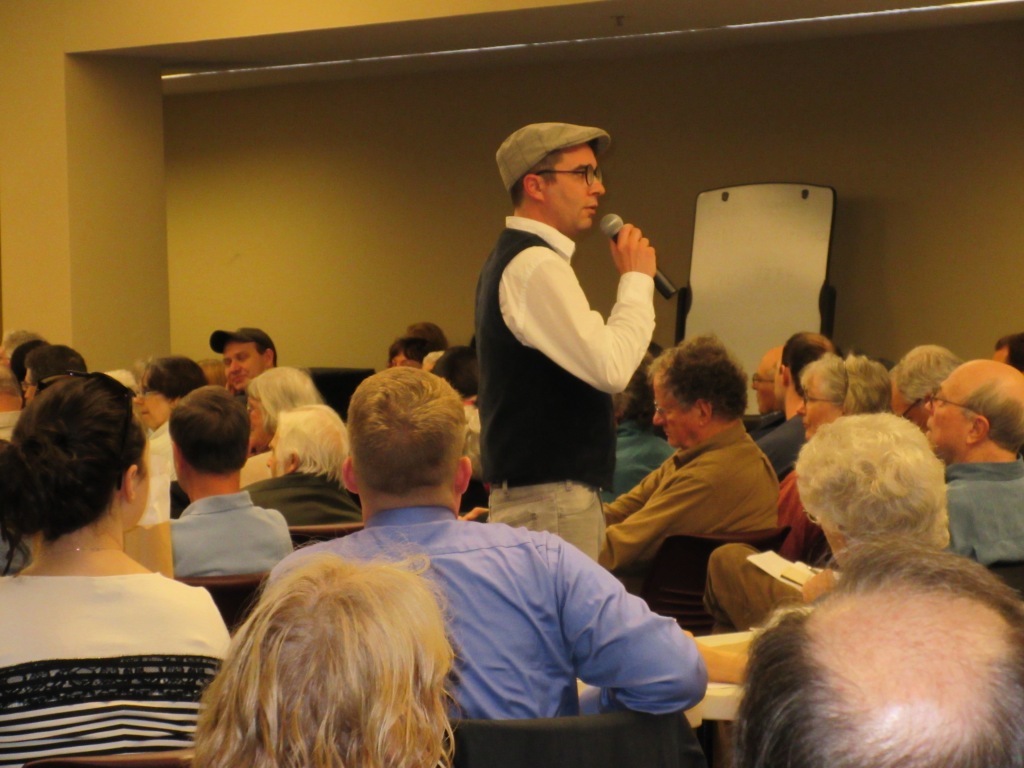 Jon mentioned that the Asheville Citizen had a circulation of 10,000, an astonishing number for a city of  34,000 population. (That was another question, as well as the population of Buncombe County which was somewhere around 57,000 in 1915.)

Was there another newspaper in town?

There was the Asheville Gazette News, a precursor to Asheville Times, which it became in 1916.

What was the difference in the two papers?  The Citizen was a morning paper and was a voice for Conservative-Democratic politics and was an advocate of economic expansion. People who grew up here have pointed out that the Asheville Times, being an afternoon paper, was read after work, making it more of a working man’s paper. In 1930, the Citizen’s owner Charles A. Webb formed the Asheville Citizen-Times Company with Don S. Elias, publisher of the afternoon Asheville Times. One Sunday edition of both papers was consolidated under the name Citizen-Times, although the editorial staffs remained separate and followed independent policies. The Asheville Times ended in June 1991.

Were there any African-American newspapers?

The only one we’ve found was a reference to the Asheville Enterprise newspaper published in 1888. We do not know of any surviving copies. Staff have noticed society columns for the black community published in the Citizen, but it would take some research to find the time span for that coverage.

Where were the fairgrounds located in 1915?

The first Western North Carolina Fair was held in 1911 at Riverside Park. The skating rink was used to show off agricultural products and the car shed was the livestock and poultry building.

And where was the ball field?

The Montford School had a baseball diamond that was sometimes used for ball games. Oates Park, however, was the main place to see a game. It was on Southside at the corner of Choctaw. The site was secured by the management of the Asheville Baseball Club in January 1913, although there was a contingency that wanted an “uptown” location. The stockholders and directors of the club named the park after J. Rush Oates, a prominent businessman and sports enthusiast who had much to do with the formation of the club. Securing a baseball field was seen as a good draw for tourists, making it a “highly necessary attraction.” There was a separate bleacher for the black community, although in 1918, when the Asheville black team, the Royal Giants played there, a set of bleachers was saved for white baseball enthusiasts. In 1913 Tyrus Raymond Cobb, outfielder with the Detroit Tigers, played Asheville’s Mountaineers team at Oates Park. It appears that the baseball club changed its name from the Mountaineers to the Tourists in 1916. McCormick Field opened in 1924. Babe Ruth played at McCormick Field in 1925 and again in 1931.

Were there any schools of higher education in 1915?

Asheville Normal & Collegiate Institute, which was at the current location of Memorial Mission Hospital, and the North State Fitting School, attended by Thomas Wolfe, and St. Genevieve College on Victoria Road. Allen Industrial Home on College Street was a school for young black women. There were also two business colleges, Asheville Business College on Pack Square and Emanuel Business College located in rooms in the Drhumor building. There was also the Bingham Military School.

We had to look this up outside or our collection resources: “Throughout the 1830s and ’40s, the white entertainer Thomas Dartmouth Rice (1808-1860) performed a popular song-and-dance act supposedly modeled after a slave. He named the character Jim Crow. Rice darkened his face, acted like a buffoon, and spoke with an exaggerated and distorted imitation of African-American Vernacular English. In his Jim Crow persona, he also sang ‘Negro ditties’ such as ‘Jump Jim Crow.’

“After the American Civil War (1861-1865), most southern states and, later, border states passed laws that denied blacks basic human rights. It is not clear how, but the minstrel character’s name ‘Jim Crow’ became a kind of shorthand for the laws, customs and etiquette that segregated and demeaned African-Americans primarily from the 1870s to the 1960s.” [http://www.ferris.edu/jimcrow/origins.htm]

Were there movie houses?

There were three movie theaters, the Galax Theatre on Patton Avenue, the Majestic Theatre on College Street and the Princess Theatre on Pack Square.  The theaters at this time often presented plays put on by the Majestic Players or the Princess Players. Theaters also had their own orchestras. Professional actors also came through presenting plays at these theaters. And there were “play movies” shown, apparently plays from other parts on film. Charlie Chaplin movies were shown in 1915.

There was also the Asheville Auditorium at about the same location as the Civic Center today. The North Carolina Collection contains programs for the plays “Never Say Die,” “H.M.S. Pinafore,” and “Rigoletto” being performed at the auditorium in 1915.

Were there any sanitariums?

Fifteen sanitariums are listed in the city directory, including Asheville Mission Hospital and St. Joseph’s Sanitarium.

How extensive was the street car system?

Twenty miles of track encompassed all points of Asheville and West Asheville, and 7.5-minute and 15-minute schedules were maintained throughout the year. (The Asheville Transit system today runs on the hour.) And yes, there was a nine-mile electric car track from Asheville to Weaverville. The board of trade wrote in 1915 that Asheville was the second city in the country to operate electric cars.

Jon Elliston is an editor and writer for Carolina Public Press and WNC Magazine–and the curator of the @AVL1915 Twitter feed, which recounts century-old news. First appearing as @AVL1914, the feed was launched from the microfilmed records of early Asheville newspapers in Pack Memorial Library’s North Carolina Collection. Jon is also a board member of the Friends of the North Carolina Room.

Please feel free to add additional comments or corrections on this blog site. We are especially interested in more information concerning the differences in Asheville’s two newspapers.

If you missed Jon Elliston’s, Asheville in 1915 presentation, he had a lot of fun doing it and will present it again at the library.