The Asheville Mall opened in 1972 pulling the large department stores with it. When the mall was in the works, the mall developer wrote letters to all of the merchants in Asheville inviting them to consider locating in the new mall. Sears opened first in 1972, with other stores following in late 1973-74: Belk’s, Ivey’s, Bon Marche, Woolworth’s,  Lerner’s, Dunham Music Store, Singer Machine Co., Lee’s Jewel Box and the S & W Cafeteria. J.C. Penny’s was the last to leave downtown in 1989. Also, the Biltmore Square Mall opened in 1988.

Who stayed downtown? Who were the long-standing established small businesses who  carried on and who then played a new role as the downtown’s “anchor stores?”

T.S. Morrison’s Hardware store is one of the most familiar. The firm was founded in 1891 and stayed in the family until Louis and Peggy Millin bought it in 1980, pumping huge sums of money into a renovation, and adapting it into more of a gift store while keeping the store’s historic ambiance. Morrison’s closed in 2006 and the building was purchased by Lexington Avenue Brewery in 2008.

Sluder Furniture was opened by Charles L. Sluder in 1905 and was purchased by Ray and Sarah Long in 1964. Wayne Caldwell and his sister-in-law Kathryn Long began operating the businesses in the mid 1970s.The business sold its downtown buildings in 2006.

Harry L. Finkelstein opened the first pawnshop in Asheville and what is believed to be the first in North Carolina in 1903.

Louis and Sylvia Resnikoff opened the Bargain Center in 1952, a discount clothing and general merchandise store at 69 N. Lexington Avenue the current site of Downtown Books and News.

They found that the shoe department was more successful than other departments, so around 1960 the Resnikoffs opened Tops for Shoes, selling adult and children’s shoes at 27 N. Lexington Avenue. A year later they opened the Uniform Center in an adjacent store front. Around 1975 their daughter and son-in-law Ellen and Robert Carr returned to Asheville to help run the business. 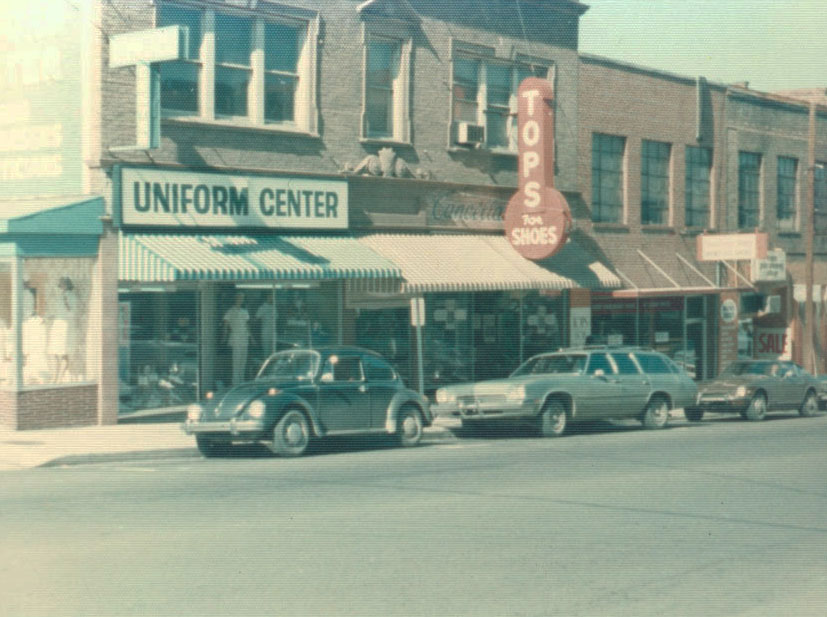 Wick & Greene Jewelers opened on Wall Street circa 1936 before moving to Patton Avenue in 1986. The store announced its closing in 2016.

And the restaurant anchor businesses? T.F. Lee opened the Paradise Chinese Restaurant in 1947. It closed in 1999.

The Mediterranean Restaurant, where everyone in Asheville has always gone to find out what is what, was opened in 1973 by Pete and Paula Aposdolopoulos who still operate it today.

If you wonder why these businesses stayed downtown and what it was like to operate a business downtown in the 1970s and 1980s, join us this Wednesday for part 2 of our 6 part series.

Asheville in the 1980s:  A  Formative Decade Told by Those Who Shaped It.

All programs are on the last Wednesday of the month, 6:00 pm-7:30 pm. Pack Memorial Library, Lord Auditorium, lower level.

Further programs in the series are:

The North Carolina Room staff is grateful to the business owners who have donated or loaned us photographs and filled out our questionnaire to help document their businesses. If you owned a business in downtown during the 1980s and would like to donate or loan us photographs, ephemera, menus, etc. or would like a copy of our questionnaire please call us at 250-4740 or email us at packnc@buncombecounty.org.