I was looking through a stack of photographs in the collection we received from the Patton/Parker family after the death of Mary Parker. This photograph intrigued me. The writing on the back of the photo upped my intrigue. I wasn’t familiar with any of the names. 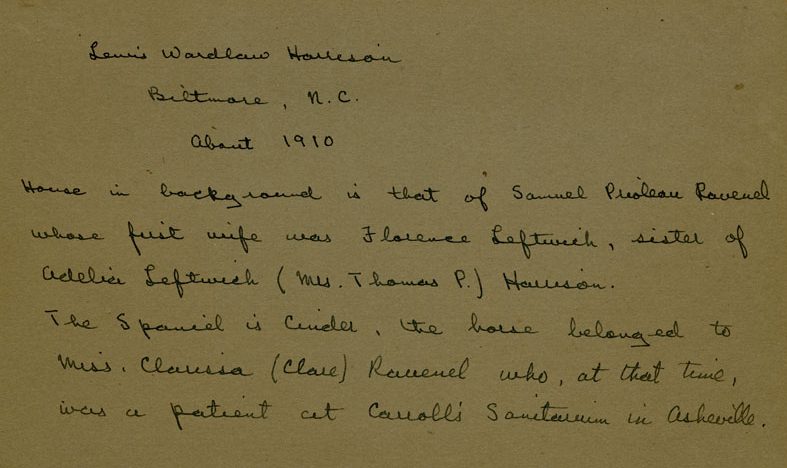 The Ravenel family lived at 2 Short Street in Biltmore. Short Street became Kitchen Place in the 1931 renaming of streets. Number 2 Kitchen Place is last listed in 1942, but I could not find out what happened to the house, whether it was razed or burned. It was gone by 1947 when the Penguin Ice Cream shop opened there. It would have been in the current site of land opposite the Wells Fargo Bank.

Who was Samuel Prioleau Ravenel? He was born in South Carolina in 1868, the son of Samuel Prioleau and Margaretta Ravenel, Sr. Samuel P. Ravenel Jr., a lawyer, was in Asheville by 1910. He served as Vice President to the Pack Memorial Library for many years and as mayor of Biltmore. It is apparent that the Ravenels were close to the Vanderbilts.

Ravenel’s wife, Florence Leftwich Ravenel is of much interest, having graduated with honors from Bryn Mawr, and awarded the European scholarship with high acclaims in literature. She pursued her studies at the Sorbonne and at the University of Zurich, and returned to Bryn Mawr where she received her doctor of Philosophy degree. She wrote extensively for publications including the North Carolina Review. Her articles were gathered into an anthology, Women and the French Tradition.” Florence, a world traveler “was greatly loved and admired by all who knew her and missed her when she died in 1923” at the age of 56.

Florence’s sister was Adelia Leftwich and she married Dr. Thomas P. Harrison. They had three children and lived in Raleigh. Lewis Wordlaw Harrison, the little boy on the horse was their son, and the children often visited at the Revenel home in Biltmore. Lewis Harrison at one time worked for the Bank of Asheville. He married Martha Parker, daughter of Haywood and Josie Patton Parker and sister of Mary Parker. Finally, a connection to the Parker/Patton family! Lewis would have been Mary Parker’s nephew.

Claire Ravenel, owner of the horse, was Samuel P.’s sister. Mention of her stay at Carroll’s Sanitarium in Asheville when the photograph was taken refers to the newly opened sanitarium by Dr. Robert Carroll later named Highland Hospital. Claire Ravenel later moved to Philadelphia and often visited here. She died there in 1951.

One other point of interest regarding the Ravenel family. While researching I found several mentions where the family would be vacationing at their summer home in Highlands. One of the articles went into further detail saying that “their place at Highlands consisted of several thousand acres of virgin forest, surrounding the old Ravenel home, which has been in the family for many years.” (Asheville Citizen-Times August 3, 1912.)

I was not familiar with the Ravenel family, but thought that I better check the North Carolina Room Special Collection’s database and was surprised to find this real photo postcard in our collection with the title, “Entrance Way–Ravenels, Highlands, NC.”

A simple internet search led me to an article “Who Were the Ravenels? in the Highlands Historical Society newsletter, Summer 2014. I read there that the Ravenel family had “been a part of Highland’s history for about 170 years.” The family contributed “good roads, a church, a popular inn, a public park and Sunset Rock to the town of Highlands. Later generations were instrumental in saving the Highlands plateau.  Click here to read this article.