Gaylord Oscar (G.O.) Shepherd Sr. settled in Asheville in 1919. At age 24, his arrival was well timed as the city began a decade of rapid growth, ripe for the energies of a young man with ambition. Through hard work  he became, according to the Asheville Citizen, “one of the leading advertising agents in the state.”  Yet advertising was only one area in which he excelled.  The photographs donated to the North Carolina Collection by his son, G.O. Shepherd Jr., testify to this.  In his roles as a business promoter, advertising executive, editor, publisher, radio station owner, and Civitan Club leader, he appears to have been involved in most aspects of Asheville civic life over the next 33 years.

G.O. Shepherd’s office stood at the Biltmore Ave. entrance to the Kenilworth neighborhood, a stone structure that was torn down around 1997.  The Kenilworth Inn, built in 1917, and the Fontainebleau development on Lake Kenilworth were two of his concerns. 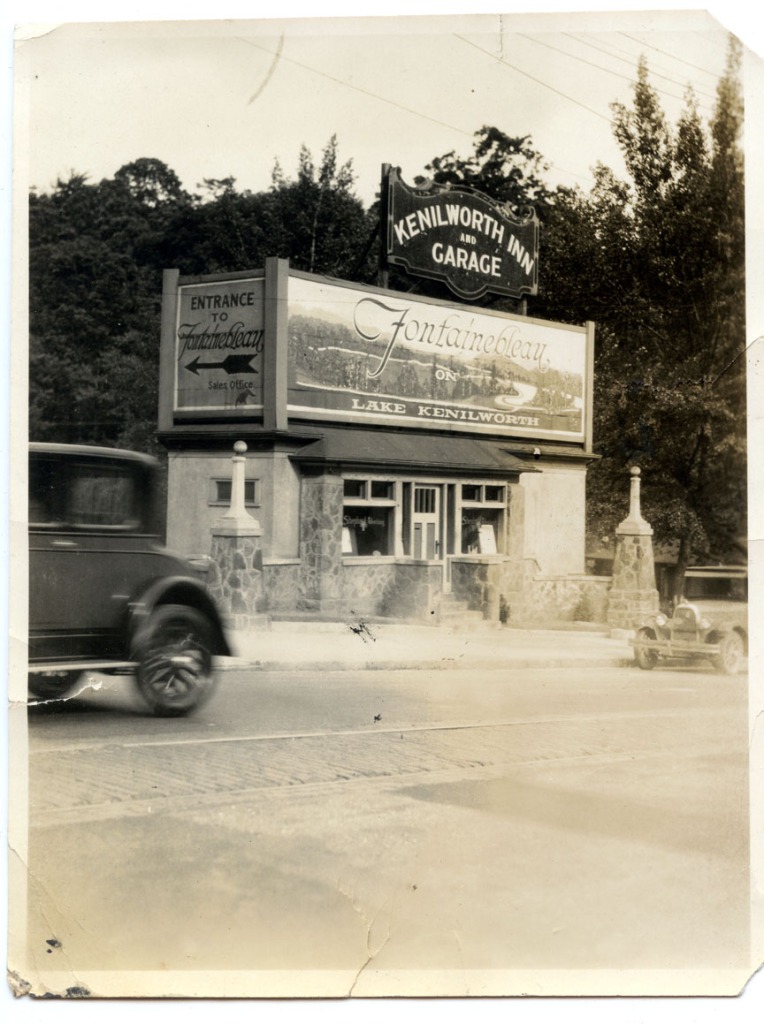 Shepherd became a skilled photographer, which surely contributed to his success in advertising.   Here his photograph documents the construction of the Kenilworth Lake dam, circa 1925. 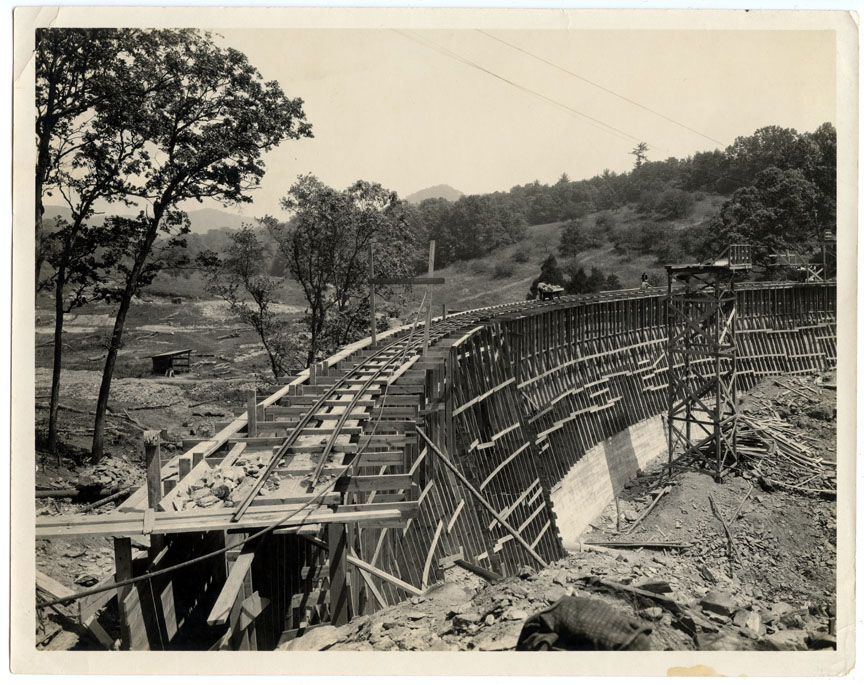 Once the dam was completed, Kenilworth Lake began to fill.  Caption on back of this photo:  “View of Lake Kenilworth, showing new homes, Feb. 9, 1926.”  An arrow points to the house under construction for the Shepherd family at 6 Plymouth Circle. 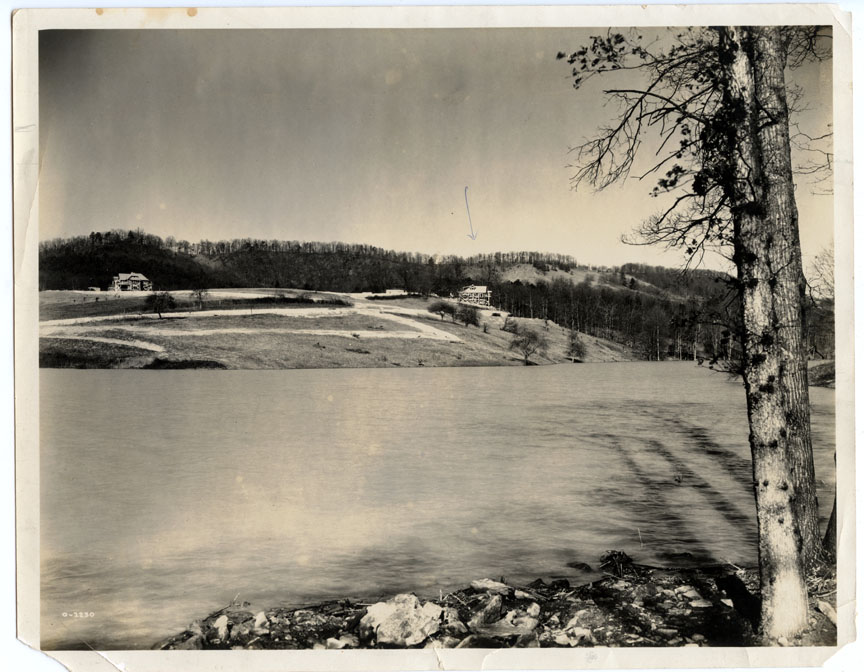 The Kenilworth police force poses in front of the Kenilworth Town Hall.  Son G.O. Shepherd Jr. reported that his parents, G.O. and Emie Shepherd, lived in the log structure soon after their marriage in 1921. 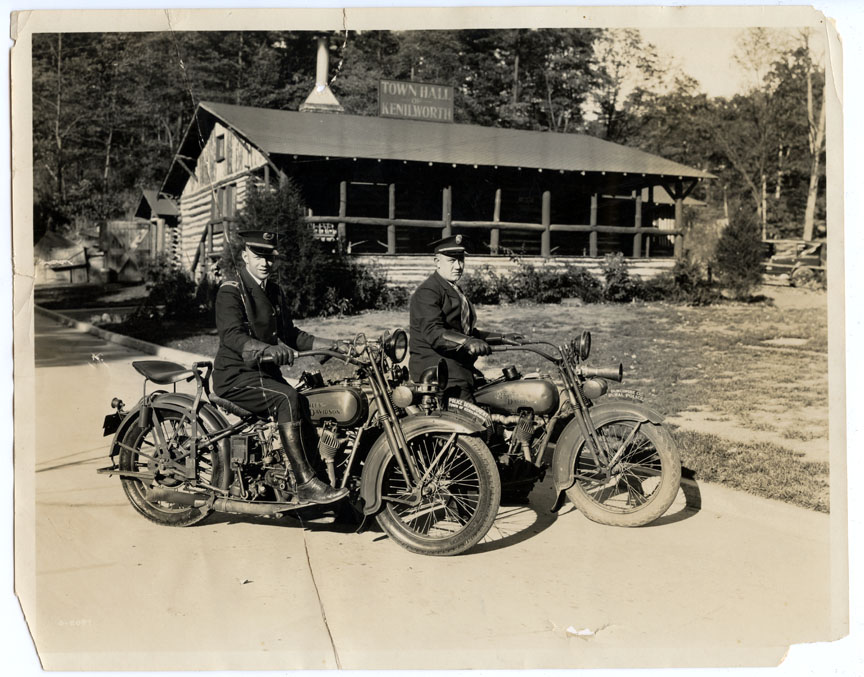 Fruits of his labor:  G.O. Shepherd fishing on Kenilworth Lake. 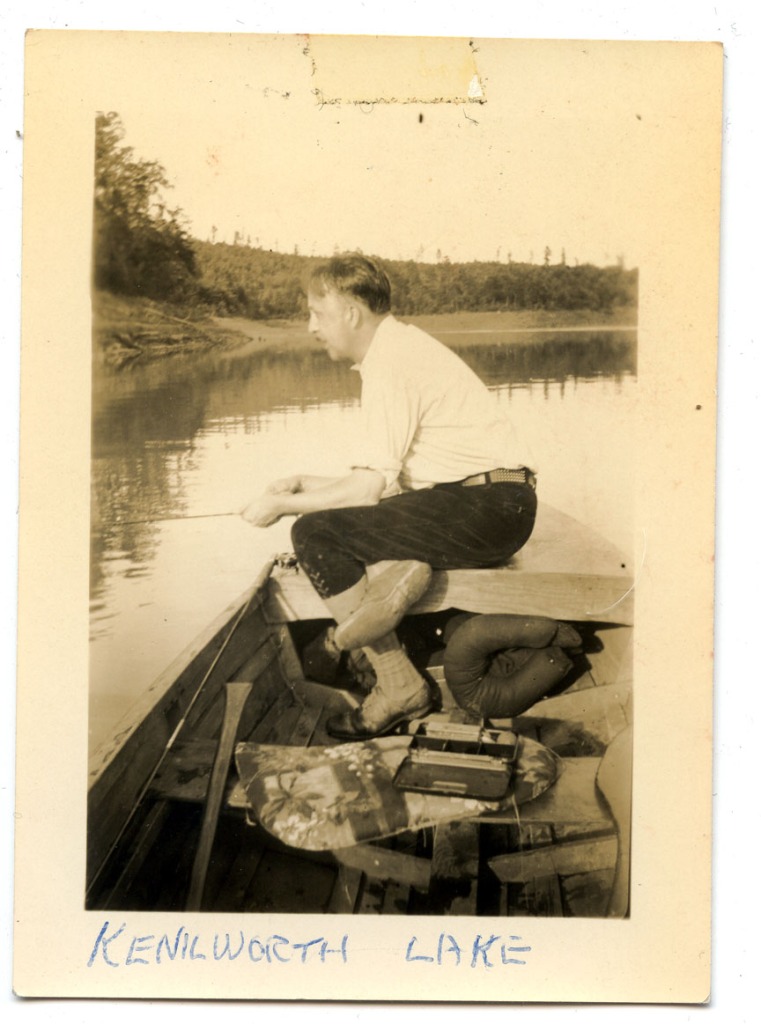 G.O. Shepherd performed as an amateur musician.  This photo of the Asheville Business Club’s Saxophone Band shows him standing on the far left holding the bass sax, 1924-25. 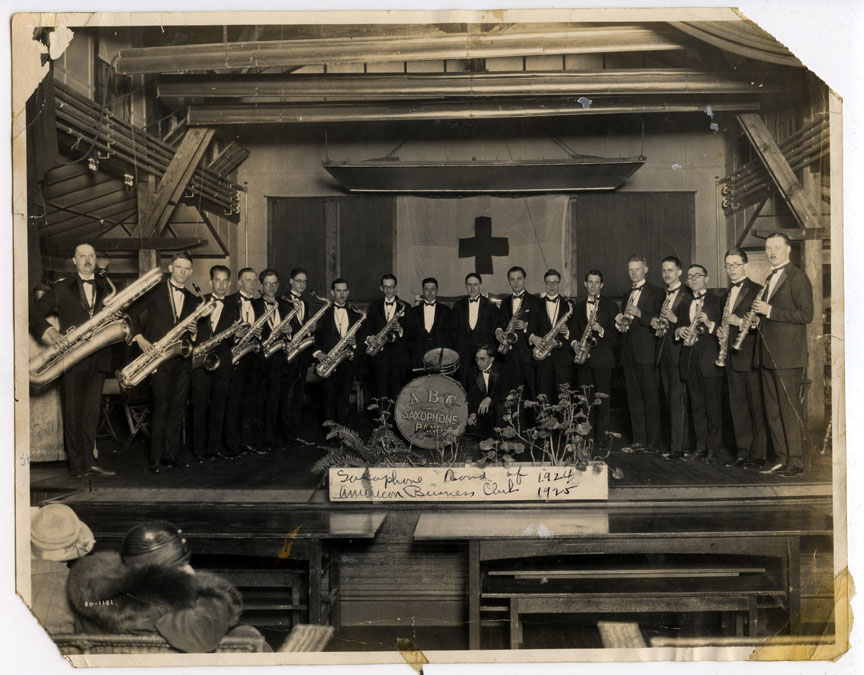 Asheville’s first broadcasting station, ABC, originated in a back room at the Asheville Battery Company at 19 Haywood Street in 1923.   Drawn to this new medium, G.O. Shepherd  joined the station, which soon became WABC.  He produced a weekly program called “GOSH and the Gang” that was directed towards shut-ins but attracted a general audience as well.  In 1927, the Asheville Chamber of Commerce took over the station’s license and changed its name to WWNC, “Wonderful Western North Carolina.”  Shepherd managed the station for the Chamber before acquiring the license himself on Aug. 8, 1928.  He then sold it to the Asheville Citizen four months later, continuing as Station Director until 1934.  “My interest was in listening,” he later wrote, explaining that he hired men to work on the technical side.  In his work at the station, he created programs by writing scripts, hosting musicians, and eventually contracting with the Columbia Broadcasting System.  During this time, he also wrote a daily column, “Down the Airway,” promoting the station’s programming.  It evolved to become a daily feature in the Asheville Citizen, expanding to a full page on Sundays. 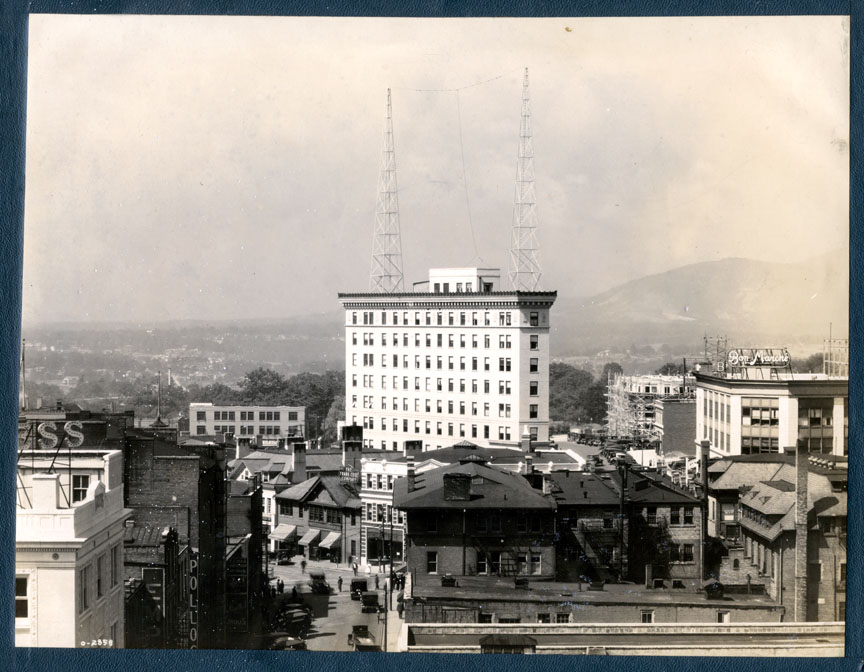 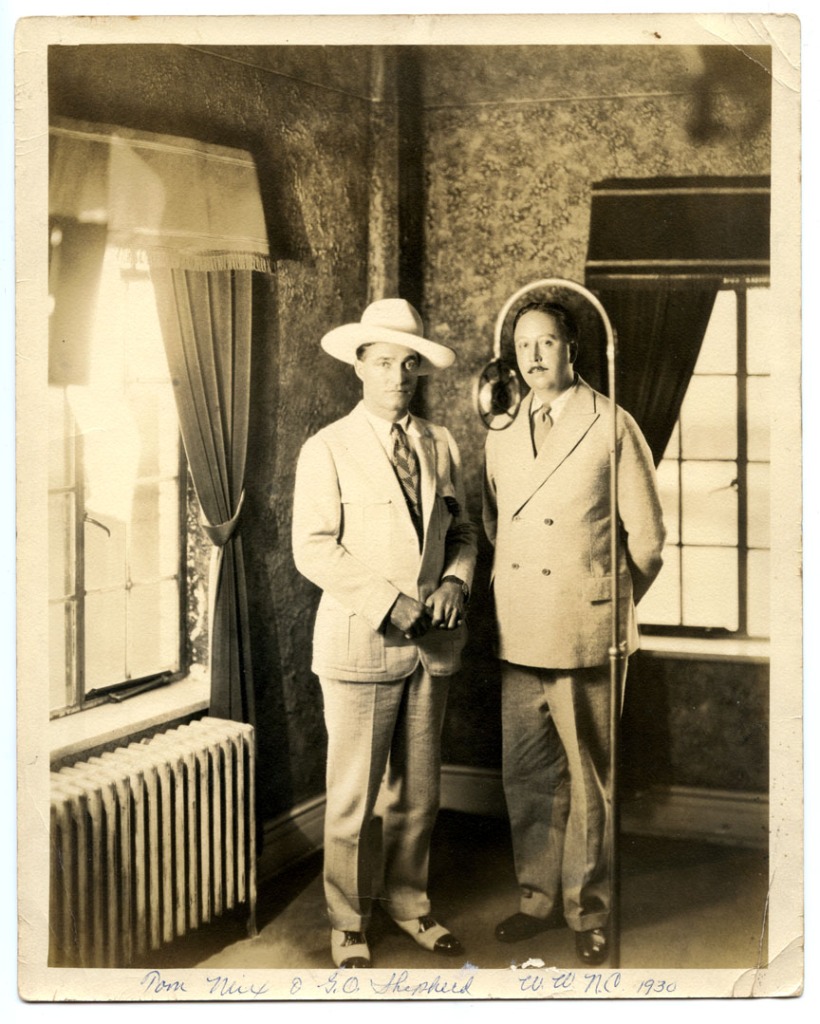 The WWNC staff posed beside a radio tower atop the Flat Iron Building, 1930.  Shepherd is pictured in knickers, third from right. 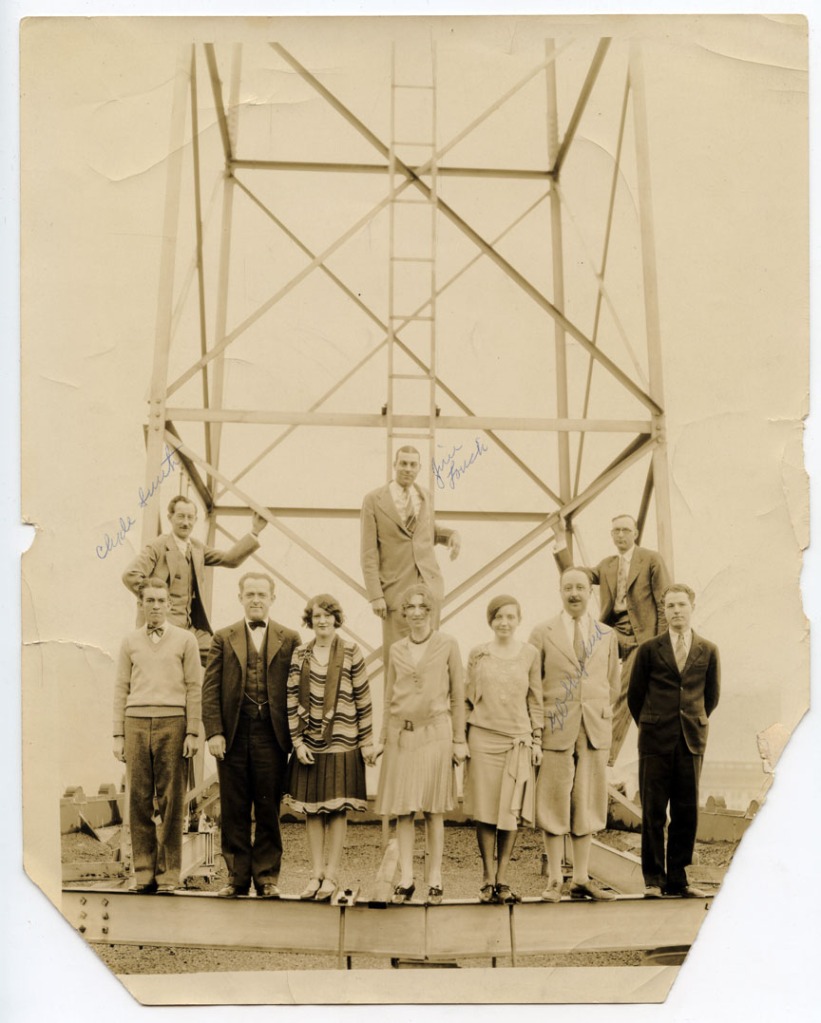 The movie “The Conquest of Canaan” was filmed in Asheville in 1921.  As an amateur actor, Shepherd must have been keenly interested in the filming as he watched, camera ready.  A number of his shots picture lead actor Thomas Meighan with unidentified extras.  In the background,  shops line North Pack Square while the Asheville City Fire department  and City Hall appear on the right. 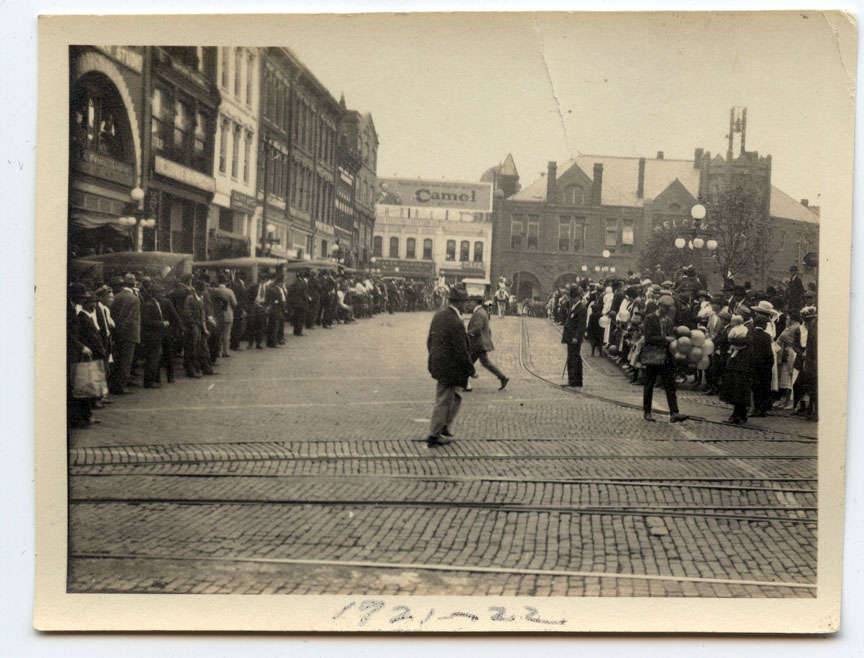 The side entrance to the Asheville City Hall has been temporarily renamed “Canaan City Jail.” 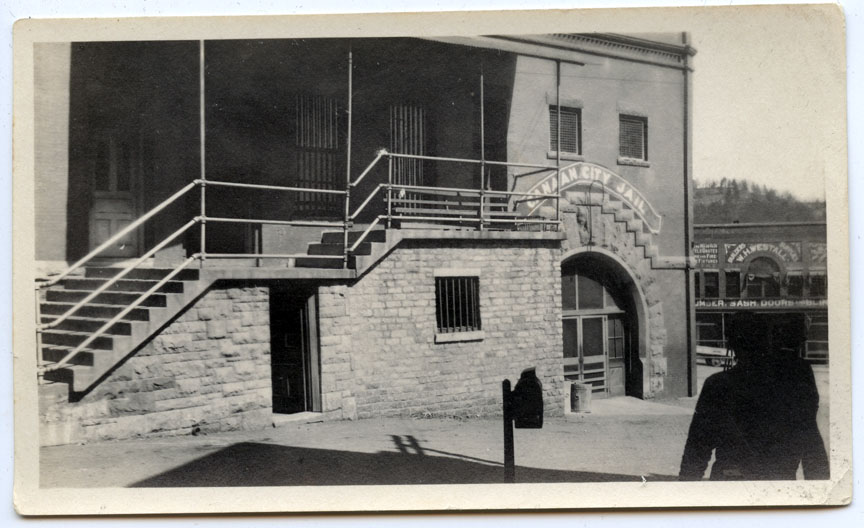 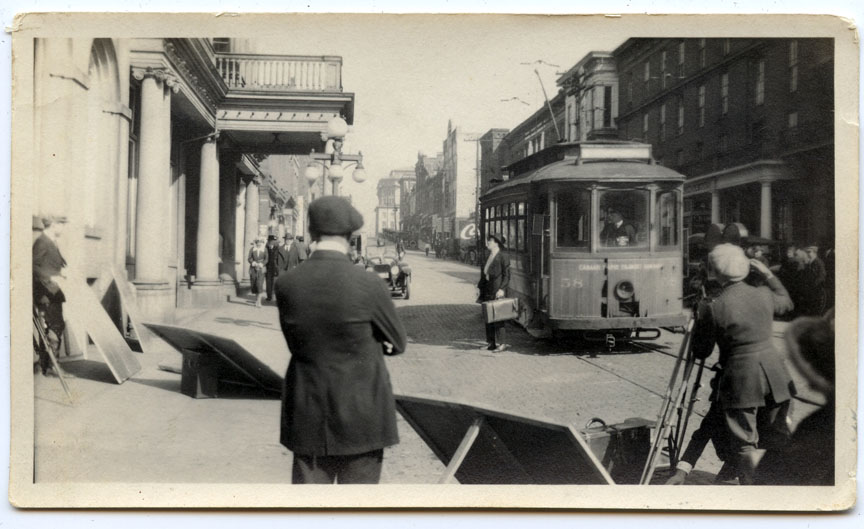 As the action heats up, a mob gathers in front of the Asheville Fire Department. 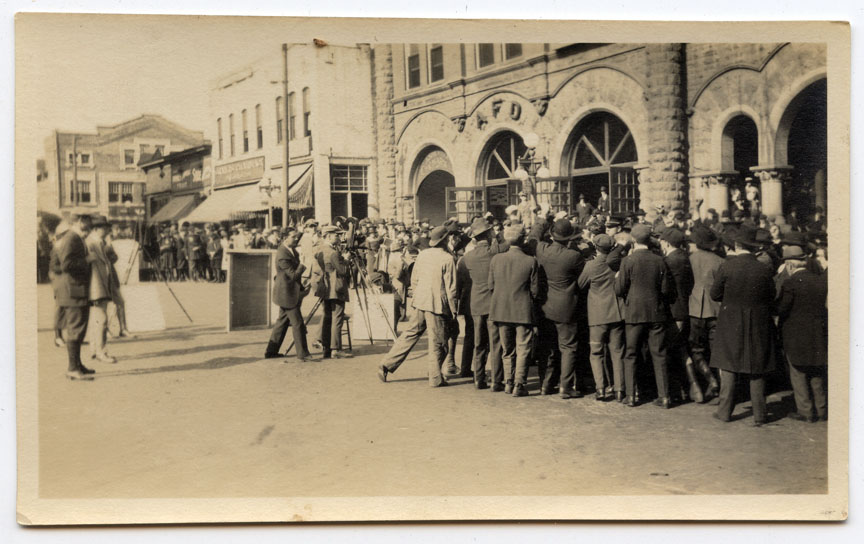 A cameraman gets the shot from above Smith’s Drug Store at the corner of Patton and Biltmore Avenues. 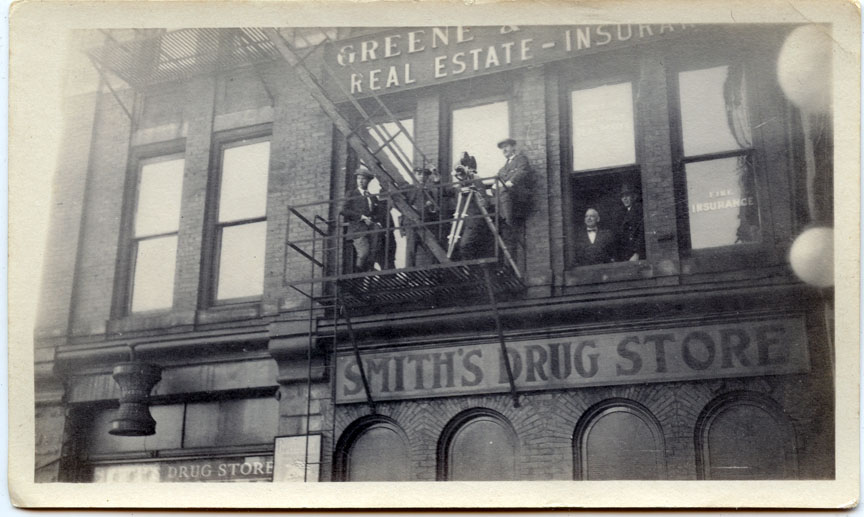 In 1952, Shepherd and his wife Emie moved to Sarasota, FL to live near their married daughter, Clare.  He lived there until his death in 1963 at age 68.  The NC Collection thanks G.O. Shepherd Jr. for donating his father’s photographs.  We are pleased to recognize G.O. Shepherd Sr.’s contribution to Asheville’s history.