Greetings From Asheville: Postcards in the North Carolina Collection.

Q: Who has over 3,654 individual postcards and 300 souvenir post card folders in their ever-growing collection?

A: The North Carolina Collection at Pack Library , of course! In addition the collection has  11 large postcard sales books that salesmen for the Asheville Postcard Company (1915-1977) carried on their calls to various businesses both near and far.

The early part of the 20th century was the Golden Age of the Postcard. Postcards were an inexpensive and colorful means of communication. Everyone used them. Those small 3-1/2 x 5 inch cards served the same purpose that  Facebook, Instagram, or Snapchat “posts” do today. On vacation? You bought a postcard of your favorite scenic wonder,  wrote a message, added a one-cent stamp, and mailed it off. Share a family photo? You’d take  a photograph with your cumbersome Kodak,  deliver the film to a developer, and then order the number of copies you needed. Later in the century, people would purchase postcards  by the dozens to  write the phrase “wish you were here” to their friends back home. Today  these vintage postcards–lovingly saved by their recipients–are fascinating footnotes documenting the social and cultural history of Western North Carolina.

You may ask yourself “Why should I care about these old pieces of card stock?” Without these small documents you might never know about what building in the 1950’s stood on the site of the current Ingles on Tunnel Road. (Hint: fried clams?)  Or what did the bland  building at 345 Biltmore Avenue look like until the early 1980’s. Somewhere buried behind that grooved masonry are the bones of one of my all-time favorite buildings in Asheville’s architectural history

What in the world was Thunderland?  When and where was it performed? And who is the young white man pleading with the actor in the “native” costume?  I don’t know all of the answers, but you could find out  with a little pleasurable research in the North Carolina Collection. 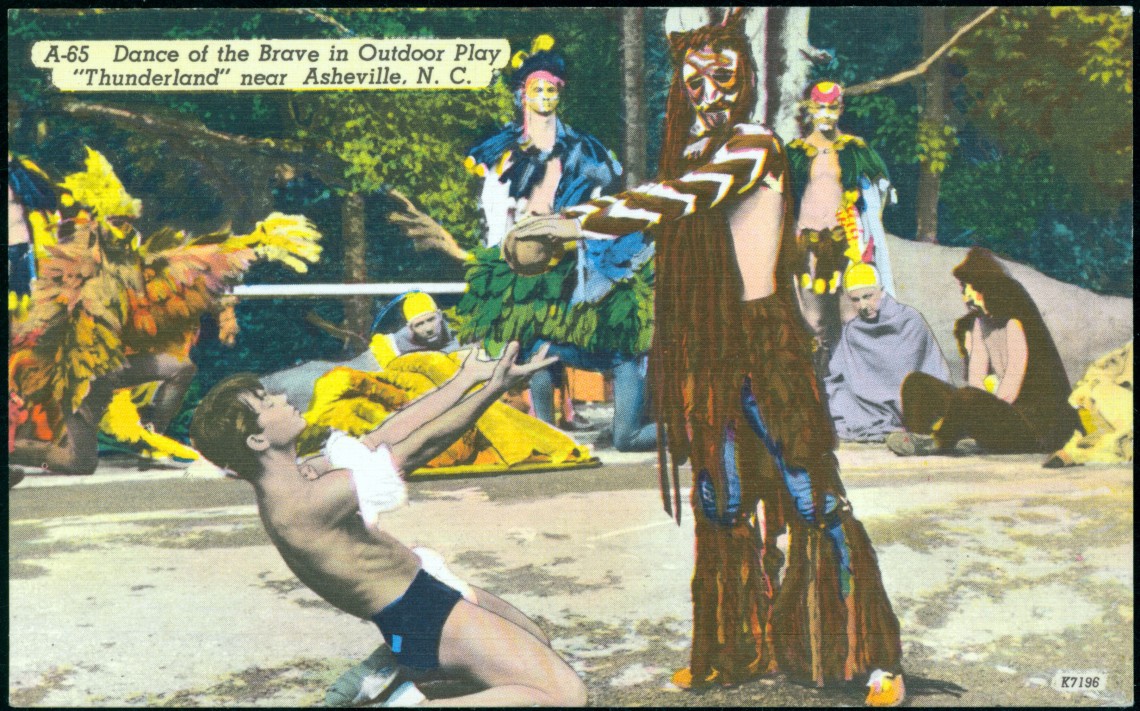 Would you care to hazard a guess where the building below stood? You could easily dig through pages in the City Directories if you can identify the vintage of the truck or the Coca-Cola sign …or you could simply flip over the postcard and see if there is an address on it! You might be surprised where it still stands today if you know where to look.

Join Terry Taylor on Wednesday, March 29th at noon as he presents  a visual potpourri  of a selection of postcards which can be found in the North Carolina Collection.  He’ll talk about RPPC’s, chromes, linen cards and more!  You’ll see Asheville (and Western North Carolina) as you’ve probably not seen it before, from the early years of the 20th century into the more recent past.  Also check out the display of postcards from the North Carolina Collection on the main floor of the library adjacent to the Circulation Desk.

Terry Taylor is as close to a native as one can be without being born in a Buncombe County hospital. His grandparents and parents both hail from the Billy Cove in Candler and the Big Sandy Mush community. He’s lived in the mountains of WNC since 1964 except for a decade in Durham County’s rolling piedmont.  After careers in special education and craft book publishing (both authoring and editing), he earned a diploma in Jewelry from the Professional Crafts Program at Haywood Community College. He lives and has a studio just outside of Asheville’s city limits.