“Made with the Simplest of Tools: Appalachian Rustic Style”

Whether made of rhododendron, mountain laurel, bent hickory, chestnut, unidentified twigs, barn board or box slats – rustic furniture and the rustic style had its antecedents in Europe, and primarily in England, in the 18th century when there was an intense fascination with the natural.  Gothic architecture, grottos, and rustic appointments became the rage.

Thomas Chippendale and others published examples of rustic chairs and benches in their works including The Gentleman and Cabinet-maker’s Director (1762) and The Cabinet and Chair-maker’s Real Friend and Companion (1765).  It took more than a half century for this interest in the natural to cross the Atlantic and even longer for noted architects, such as Andrew Jackson Downing, to embrace rustic architecture and furnishings.

A rustic chair from the Valle Cruces Abbey, an Episcopal mission established near Boone, North Carolina, is dated 1847. Made by one of the members of the mission it was known as the Bishop’s chair and is the earliest Appalachian rustic piece found so far.

Early pieces like the Bishop’s chair are the rarity. In general much of the rustic furniture made in the Southern Appalachians dates from the late 19th century and well into the 1940’s. There are several reasons for this delayed development of a style that had become popular in England during the 18th century, including an ocean to cross, but probably the most important is the growth of a market.

On Wednesday, May 31, Lynne Poirier-Wilson who has researched, developed an exhibition and lectured on the Appalachian Rustic style will focus her talk on Asheville and nearby areas. Where were rustic accents employed, who was making and using rustic furniture and building rustic structures, what did the furniture, souvenirs and building additions look like?  What’s still out there?  So grab a sandwich and come for a look at some engaging regional history. 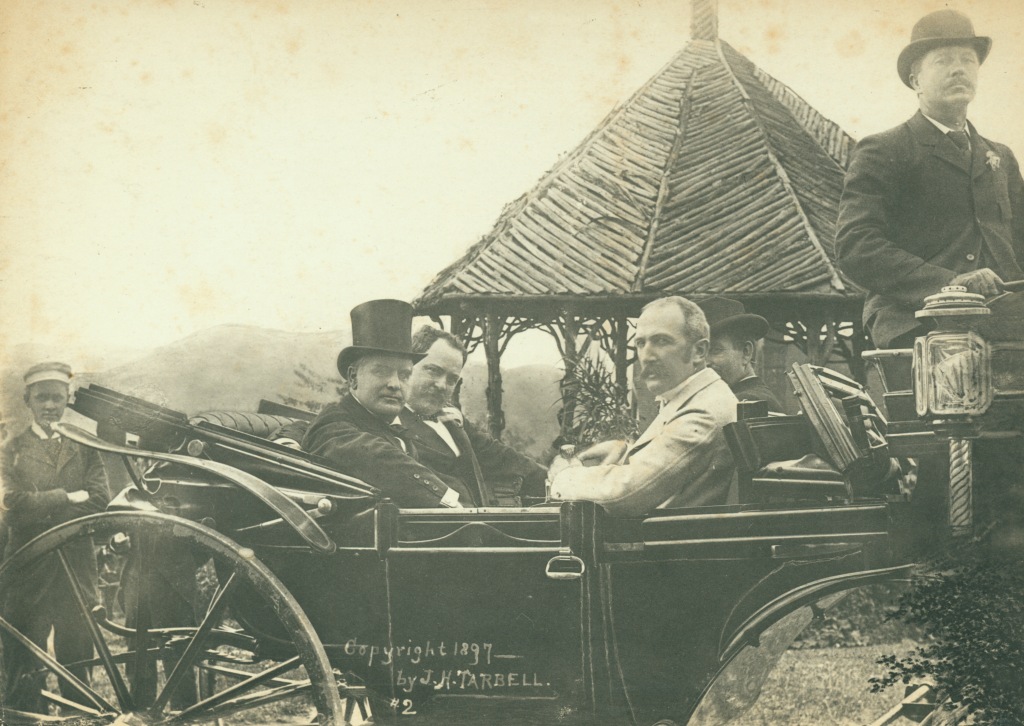 John H. Tarbell photo of U.S. President William McKinley (in top hat) in a carriage, arriving at the Battery Park Hotel during his visit 6/14/1897. In view is a rustic structure on the grounds of the hotel.

Lynne Poirier-Wilson is a retired Museum Curator and Administrator who has worked in museums in eastern PA and western NY. She moved to Asheville in 2000 and took a part-time job as a Curator with the Asheville Art Museum curating exhibitions that explore both art and culture history. Lynne has served on the board of the Swannanoa Valley Museum, and volunteers for the Asheville Art Museum and for the North Carolina Collection, Pack Memorial Library. Lynne has a fond affection for anything rustic and has written several articles on rustic art and furnishings.

Post by Lynne Poirier-Wilson, Program Speaker and President of the Board of the Friends of the North Carolina Room.