Family Feud:  The Bitter Battle Between E.W. Grove and Fred Seely For the Grove Park Inn

Refreshments will be served.

All events are free and open to the public. 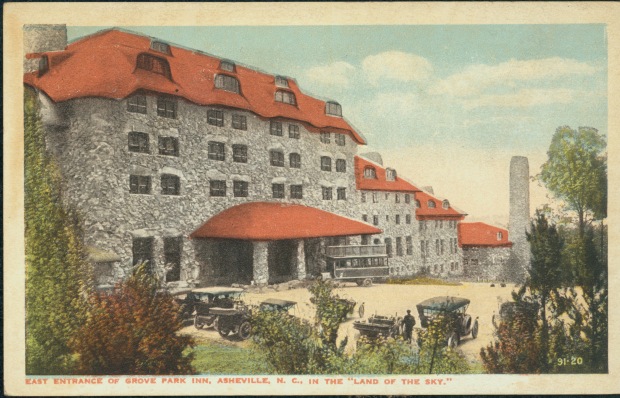 East entrance [rear/main] entrance of the Grove Park Inn with many open touring cars parked and a jitney at the entrance.

The Asheville newspaper reported in mid-September that Miss Evelyn Grove had left the city for St. Louis to visit with family and friends.When the Asheville Daily Gazette published a telegram they had received of Evelyn Grove’s marriage to Fred Seely, it came as a “surprise to all of their friends.” The Seely’s moved to Asheville in 1912 where Seely soon set about planning the design of the Grove Park Inn and managed its construction for his father-in-law. Seely took over operation of the inn in 1914 but around 1921 problems arose between Grove and Seely. Grove re-wrote his will in 1921, “and in doing so nullified an earlier agreement he had made with Seely.” [“The Man Who Built, Loved, and Lost the Grove Park Inn” by Bruce Johnson, 1991.]

No one can tell the story better than Bruce Johnson.