We met and talked with some wonderful people–all of whom were so proud of being graduates of Stephens-Lee.

We collected some good stories and memories while there.

Stephens-Lee opened March 7, 1923. The school became known for its excellent faculty, and curriculum, as well as for music and sports. The school also became a center for culture and arts for the black community.

Stephens-Lee closed at the end of 1965 with students being reassigned to the newly built South French Broad school. Two years later, the students were integrated into Lee Edwards High School and the name was changed to Asheville High School. The Stephens-Lee school building was demolished by the City of Asheville–literally overnight–in 1975. The loss of this cultural icon, where so many lives were encouraged to be the best that they could be, was a terrible blow to the community. 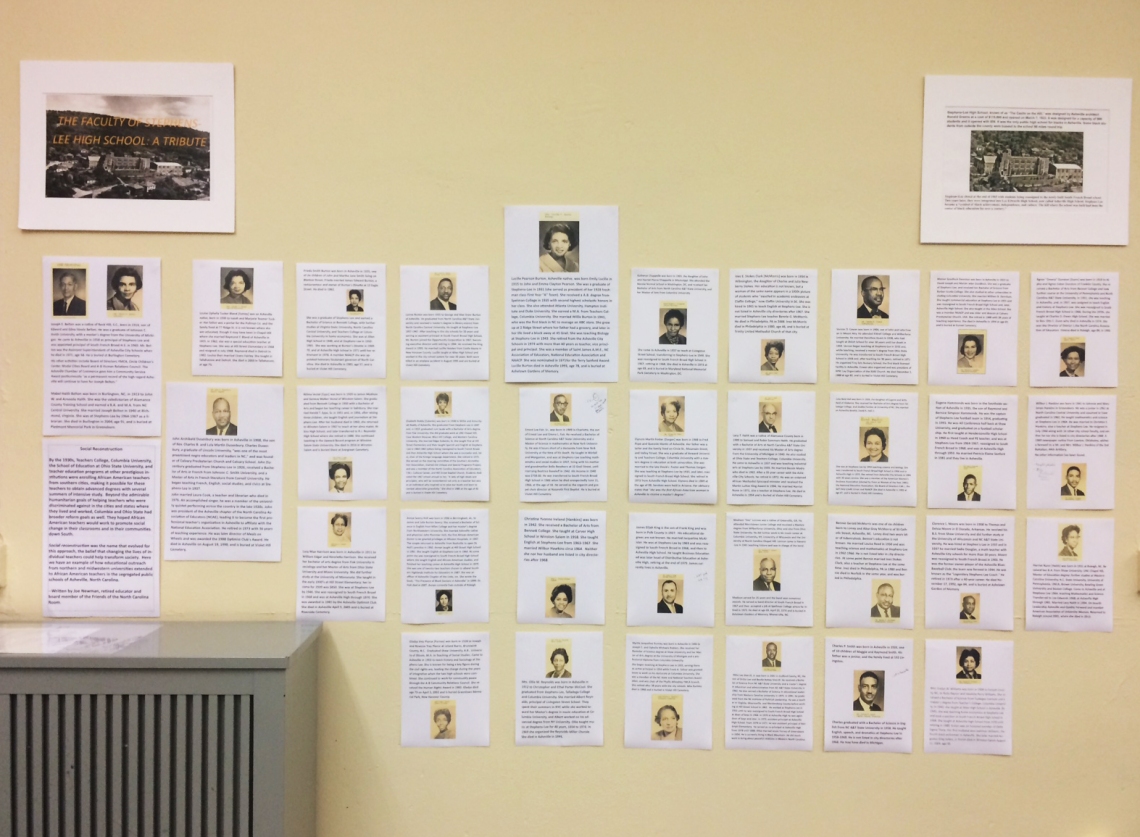 As we’ve posted earlier in the year, we have been working to document all 33 faculty members of 1964, the year before the school was closed. Information that has been collected for each of the teachers includes: birth date and place, parent’s names, college graduated from, college or university for master degrees, as well as further work teachers did at graduate level. Also, the name of spouse, when the person started teaching at Stephens-Lee and whether or not they were reassigned to South French Broad after 1965, and whether or not they were reassigned to Asheville High School after 1967. We tracked who resigned, or moved away or took other professions after integration, and where the person died, their age, and where they are buried. Current statistics show that of the 33 faculty members, all had college degrees and 19 that we know of also had master’s degrees, two had double master’s and one died unexpectedly being four hours from having his doctorate degree. There is more information yet to gather, but we hope to have booklets of the exhibit made for the North Carolina Room and the Stephens-Lee Archive Room at the Stephens-Lee Center.

Here are some of the people we met and talked with. Their love of their time at Stephens-Lee was infectious.

Herbert Porter is the son of Herbert and Parthenie Vest Porter and grew up in the Hill Street section, and then from age 7 on, they lived on Walton Street. He most remembers Mrs. [Julia] Hall who taught him geometry. “Geometry causes you to think.” After graduating he went to NC State A&T University at Greensboro, majoring in biology and chemistry, graduating in 1962. “Back then during Civil Rights there were no jobs in that field for blacks. I applied for a job with the National Institute of Health but by the time they offered me a job, I was working for the Post Office and the salary there was $5,000 and N.I.H. only offered $3,500. I had a child on the way and had to choose the Post Office.”

Stephens-Lee High School was named in honor of Edward Stephens, the school’s first principal and Hester Ford Lee, the wife of Walter S. Lee, a later principal through 1917. Rita Lee Brown is Hester Lee’s granddaughter. Her great Aunt was Irene Hendrick, the head librarian of Asheville’s first black library, 1926-1966. In 1951 it became a part of the library system.

Willie May pointed to the photo of Madison “Doc” Lennon and said, “He was the sweetest and mildest mannered man you’d ever want to see. His whole life was music.”

I went outside and met Ruby waiting for her niece to pick her up. “They’re not playing my kind of music . . . Besides, I need to go home and rest up for tomorrow!” Ruby thought she was the oldest of the alumni there that night.

Ruby’s parents were Lewis and Esther Haynes Rice. When Ruby graduated from high school she took cosmetology and did people’s hair for years. Her father worked for over 30 years as an orderly at the V.A. Hospital, and Ruby has now volunteered there for sixty some years.

“I grew up right on this side of the tunnel on College Street. [Their house was near Berry Temple and the Allen High School.] And then in later years I moved to the Southside section. Of course I have relocated twice because they bought my house to build the highrise and the Garden Apartments. I’m on Walton Street now.”

I asked Ruby if she had favorite teachers and she said, “All of them were my favorites.” She did recall her home room teacher Mr. Hendricks, and Mrs. [Ollie M.] Reynolds who wrote the school song, and headed the glee club which Ruby sang in. She said she learned to sew in home economics, and she still sews. When I asked her if she had any other thoughts about Stephens-Lee, she said, “They taught us not only book things, but how to live at home and how to respect people and just live a good life. And I just treasure the teaching that I got from them.”

Mr. Young told us some information that we didn’t have which is that faculty member Charles King graduated from A&T University–“THE GREATEST UNIVERSITY ON EARTH!”

Mr. Young told us that Mrs. Inez Clark, who taught English, made them all learn the Greek alphabet. After Stephens-Lee, Mr. Young graduated in 1965 from NC State A&T University, “NC STATE A&T UNIVERSITY, THE GREATEST UNIVERSITY ON EARTH.”

. . . “Well, all of us who went there.”  While attending NC A&T, he was able to read the letters on the Greek bowl. After that, he joined the military and they sent him to Germany. When he first got there he was at a place where Greeks lived down the hall in another bay. While walking down the hallway he saw a long banner written in Greek. He stood there reading, “alpha, beta, gamma, delta . . ” and a Greek man walked up to him and said, “You read this?” He said, “No, I just read the alphabet.” COME IN! COME IN? You speak Greek.” “No, sir, I just read the alphabet.” “You speak Creek. COME IN! COME IN!

[I nominate William Young for Historian of Stephens-Lee.] 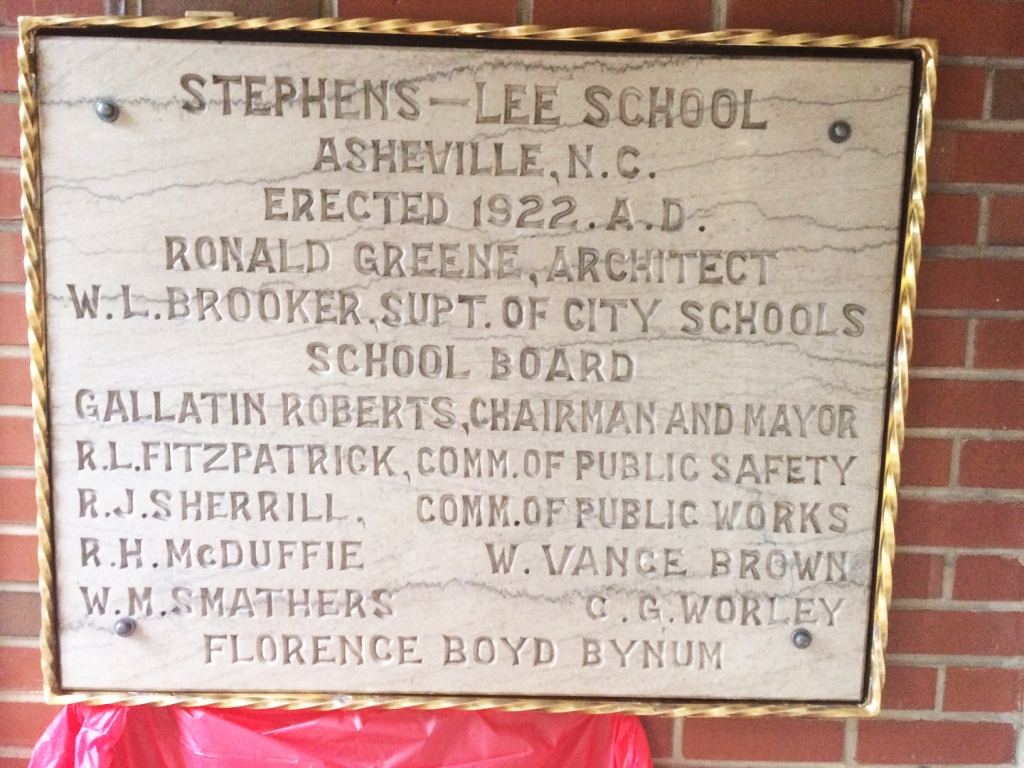 We’re collecting stories. Please comment on this blog post any of your special moments at Stephens-Lee and what class you graduated from.

Also, the Stephens-Lee Alumni Association and Asheville City Parks & Rec. with Sharon Fahrer of History @ Hand are working to create a timeline to be placed in the Stephens-Lee Center hallway. It will highlight significant people and events in the school’s history. They want your input on events or people who you think should be included on the timeline. Please contact Sharon at historyathand@charter.net or call her at 828-777-1014 or contact Sarah Weston Hart at wesrobbie@aol.com.