Eudore Artus was born in the Bay of Biscay area of France in 1883. His father was a shoe maker but Eudore took up gardening at age 12. In 1910 he was working in Paris for a woman from Montreal, Canada, who was a friend of Mother Deplanch, founder of St. Genevieve. While Mother Deplanch was visiting her friend in France, the woman received a message from P. S. Henry of Asheville asking her to find him a gardener. Later that same year, after receiving his membership in the Association Professionel de Saint-Fiacre, Eudore came with his wife Julia to Asheville and worked as gardener for P.S. Henry at his Zealandia estate for the next seven years.

In 1918 he became the gardener at St. Genevieve-of-the-Pines. He raised sufficient crops on a two acre tract behind the school to supply it with all of its fresh vegetables and flowers for nine months of the year. The only tools Eudore used was a spade, his hands, and occasionally a potato hook to work the soil. He never used pesticides or herbicides but built up his soil from decomposed waste from the kitchen, coffee grounds and mostly leaves raked from the school property. He believed: “Feed the ground, the ground will feed you.” He raised dandelions for salad purposes and French endive, a delicacy, he sold to local markets. He also grew his own pansies which were scattered around the school grounds. Eudore loved soil. He also loved to work. “To work is to be happy.” His philosophy of life and his prescription for living was: “Work hard, eat hard, and sleep hard.”

Eudore Artus once told a reporter: “What would all the money in the world mean if when you came home from work in the evening there was no happiness or joy in the home and nothing growing in the yard.” (Asheville Citizen-Times, May 8, 1983.)

This photo of Artus in his garden at his home at 22 Livingston Street, shows him at age 64 in his 29th year as gardener at St. Genevieve-of-the-Pines. 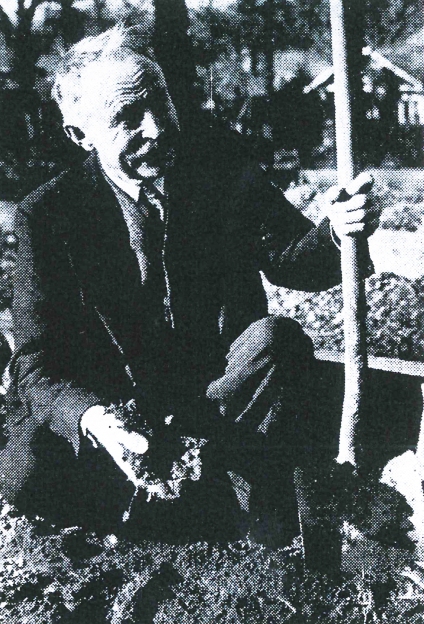 Jules and his sister Marie Artus were the owners of Art’s Garden Shop at 62 College Street at the corner of Lexington Avenue. Besides selling plants and seeds, they sold puppies, kittens and parakeets, canaries, hamsters, gerbils and mice. The shop operated from 1963 until 1987. Jules had died in 1978.

Photographs taken by Michael Garner and Rachel Stein, circa 1976-1980.

Marie worked for several years at T.S. Morrison’s Hardware, and then worked at Jesse Israel & Sons for 16 years until she retired in 2003. Her obituary in 2010 said that, “Marie loved gardening and all of God’s creatures” and spoke of “her kind, gentle spirit and love for her family and friends.” The family were all members of the Basilica of St. Lawrence and are buried in Riverside Cemetery.

This writer remembers Art’s Garden Shop and especially Marie with great happiness. It was my favorite pet shop I’ve ever been in. And I do recall seeing Marie later at Jesse Israel’s, usually in the back of the store. Does anyone have any memories of Jules and Marie to share?