Edwin Wiley Grove had a grand vision. After striking it rich in the patent medicine business he began to invest in real estate, a hot market in the Southern United States throughout the 1880s and into the 1920s. Grove purchased property in a number of major cities, including Atlanta. And although his famous tasteless chill tonic had swept the nation as a cure-all, the pharmaceutical and real estate mogul suffered from ceaseless, chronic hiccups. And those hiccups are what lead Grove to Asheville, a small

mountain town quickly transitioning into a tourism and leisure mecca.

Like many people in the early twentieth century, Grove and his doctors believed that temperate climate and elevation of the Blue Ridge Mountains would be beneficial to his health. However, Grove was not content to arrive in Asheville and rest and retire to a vacation home. Upon his arrival, the businessman set himself to work applying his vision through investments that would change the financial, architectural, and physical landscape of the city and surrounding areas forever.

Many are familiar with Grove’s investments in the Asheville city center: the Grove Arcade and Battery Park Hotel being the most prominent and notorious. Grove’s purchase of Battery Hill and subsequent demolition of Col. Frank Coxe’s original 1886 Queen Anne resort ushered in a new era for Asheville’s central business district, centered along Haywood St. However, topping Battery Hill and establishing his enormous Grove Park Inn were not his only lasting Buncombe County legacies.

Grove had a vision to establish one of the nation’s first planned communities. A subdivision that encompassed everything that the average middle class citizen could need or want within walking distance of their home. The idea apparently came from Grove’s understanding of his Grandparents’ hometown in England, where all the homes were situated around a public square that hosted a post office, library, church, and businesses. The idea began to take shape in 1919 when Grove’s investment firm purchased a parcel of land in Swannanoa from the Alexander family and began subdividing it into lots. By the fall of 1925, the parcels were complete with sewer, water, and electricity, and investors were choosing their preferred home and business sites.

Like many of his projects, Grove named the development after himself: Grovemont on Swannanoa, or simply Grovemont. Potential investors quickly took interest, and letters began flooding in to Grove’s real estate sales office from all over the country. Grove and his salespeople were also intent on advertising the community far and wide, drawing in investments from Atlanta, Cincinnati, Pittsburgh, Boston, and beyond.

Here in the North Carolina Collection, we hold the E.W. Grove Investments Business Correspondence, Ledgers, and Time Books (MS016) dating from 1909-1925. A brief investigation of these materials reveals just how interested not only people from around the country, but also local folks, were in purchasing a lot or home in Grove’s new model community. Most of the letters in this collection are almost completely identical to the very first item in the very first folder. A “model” or form letter. Pictured below, notice how someone has penned “Model A” in the top margin. 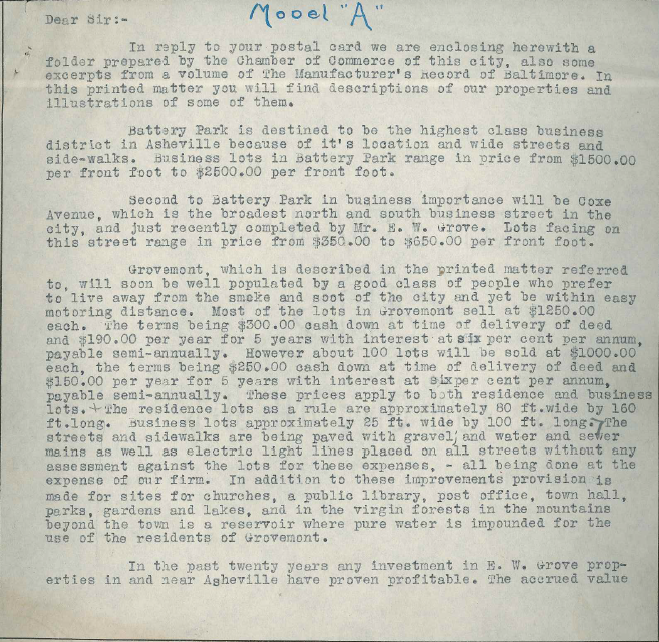 According to one letter in this rather large collection, the market was so hot that investors were turning a profit within a matter of a couple of months. The business office kept itself rather busy sending out informational brochures and photos to interested parties all over the country, and setting up advertising deals. Click the links below to read a few more letters from the collection.

Once completed, many of the homes in Grovemont were reminiscent of the arts and crafts architecture employed in the construction of the Grove Park Inn. Local stone from Grove’s Grovestone Quarry, only moments down the road from the community, were used to construct the homes.

Although there was a great deal of interest and investment in Grovemont in the 1920s, many of the lots were purchased by investors who never intended to build homes on their lots. Combined with E.W. Grove’s death in 1927 and with the financial strains of the Great Depression, the result was many of the intended arts and crafts style homes were never built. Today, the community is a mix of the original Grovemont homes and modern

homes built throughout the remainder of the 20th century and into the present.

To the casual observer, modern Grovemont may seem like a subdivision without a sign or lack of architectural uniformity (a relief, perhaps. Some planned communities these days feel like a maze of completely identical structures…) However, it sports some elements of E.W. Grove’s original intentions. As part of the Buncombe County Public Library System, our favorite feature is the Swannanoa Branch Library which sits in the center of the community along with a park and playground, and St. Margaret Mary Catholic Church holds a prominent place in the center of the community, as well.

Over the years, Grovemont has been home to a number of families, and hopefully many will continue to live and thrive there for years to come.

As a reminder, this post is a part of our 52 Weeks, 52 Communities Series. In this series, we are covering a different Buncombe County community each week. Do you have materials related to Grovemont or some other Buncombe County community you’d like to let us know about? Do you, your parents, or grandparents have a good story to tell? Please let us know! We want to hear from you! Be sure to visit our friends at the Swannanoa Valley Museum & History Center for more Grovemont and Swannanoa goodness! The North Carolina Room is Buncombe County’s Public Archive, we want to help preserve and make accessible the history and culture of Asheville and Buncombe County for all its residents.

This post was authored by Katherine Calhoun Cutshall., a librarian working in the North Carolina Room at Pack Memorial Library.